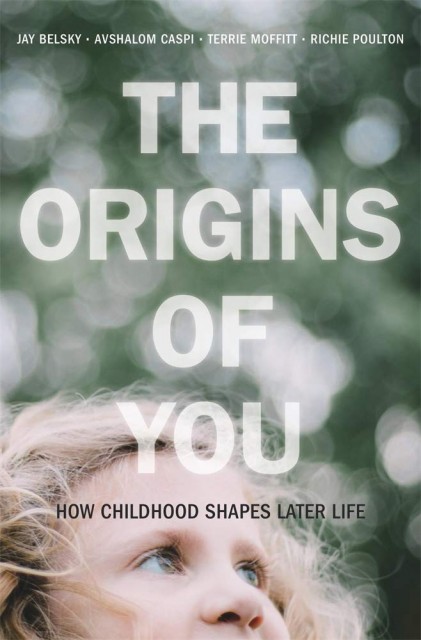 After tracking the lives of thousands of people from birth to midlife, four of the world’s preeminent psychologists reveal what they have learned about how humans develop.

Does temperament in childhood predict adult personality? What role do parents play in shaping how a child matures? Is day care bad―or good―for children? Does adolescent delinquency forecast a life of crime? Do genes influence success in life? Is health in adulthood shaped by childhood experiences? In search of answers to these and similar questions, four leading psychologists have spent their careers studying thousands of people, observing them as they’ve grown up and grown older. The result is unprecedented insight into what makes each of us who we are.

In The Origins of You, Jay Belsky, Avshalom Caspi, Terrie Moffitt, and Richie Poulton share what they have learned about childhood, adolescence, and adulthood, about genes and parenting, and about vulnerability, resilience, and success. The evidence shows that human development is not subject to ironclad laws but instead is a matter of possibilities and probabilities―multiple forces that together determine the direction a life will take. A child’s early years do predict who they will become later in life, but they do so imperfectly. For example, genes and troubled families both play a role in violent male behavior, and, though health and heredity sometimes go hand in hand, childhood adversity and severe bullying in adolescence can affect even physical well-being in midlife.

Painstaking and revelatory, the discoveries in The Origins of You promise to help schools, parents, and all people foster well-being and ameliorate or prevent developmental problems.

“Will prove one of the best and most important works of the last few years…Fascinating.”―Tyler Cowen, Marginal Revolution

“The Origins of You brings the groundbreaking research of the top developmental psychologists of the past quarter-century to a wider audience. The book captures the genius and visionary stature of its authors and illustrates their profound influence on the current and future thinking of the field. A masterpiece!”―Dante Cicchetti, Institute for Child Development at the University of Minnesota

“It’s hard to imagine a better introduction to the way that contemporary developmental scientists think than The Origins of You, and it is hard to think of a more qualified group of writers, themselves among the most important, creative, and accomplished scholars in the field, to serve as guides. In much the same way that Bronfenbrenner’s The Ecology of Human Development forever changed the way we think about the environment, this book will change the way we think about the process of development itself. The Origins of You is destined to become a classic.”―Laurence Steinberg, author of Age of Opportunity: Lessons from the New Science of Adolescence

“The Origins of You poses a question that is both timely and timeless: how does each of us become the unique person we are? Drawing upon the most authoritative psychological studies ever conducted on the topic, the authors offer a treasure trove of remarkable insights that both underscore the complexity of human development and affirm the power of human resilience.”―Dan P. McAdams, author of The Art and Science of Personality Development

“A fascinating book from an outstanding team of scientists, dedicated to answering the central questions about how lives develop.”―Anne Petersen, University of Michigan

“The Origins of You deserves to be read by everyone who wants to understand human development.”―David P. Farrington, Cambridge University

“Engaging…Displays scope and curiosity, as the authors look at genetic factors, whether early circumstances can forecast certain later developmental outcomes, how and if the family experience and the environmental situation shape aspects of later life, and the role of the childhood experience in determining elements of adult health.”―Kirkus Reviews

Jay Belsky is the Robert M. and Natalie Reid Dorn Professor of Human Development at the University of California, Davis. He was a founding investigator of the NIH Study of Early Child Care and Youth Development in the United States and the National Evaluation of Sure Start in the United Kingdom. He received the Urie Bronfenbrenner Award from the American Psychological Association.

Avshalom Caspi is the Edward M. Arnett Professor of Psychology and Neuroscience at Duke University and Professor of Personality Development at King’s College London. He is a recipient of the American Psychological Association Award for Distinguished Scientific Contributions to Psychology.

Terrie E. Moffitt is the Nannerl O. Keohane University Professor at Duke University and Professor of Social Behaviour and Development at King’s College London. She has received a host of honors including the Stockholm Prize in Criminology and is a member of the National Academy of Medicine.

Richie Poulton is Professor of Psychology at the University of Otago in New Zealand, where he serves as codirector of the National Centre for Lifecourse Research. An elected fellow of the Royal Society of New Zealand, he received the New Zealand Prime Minister’s Science Prize for the Dunedin Multidisciplinary Health and Development Study.