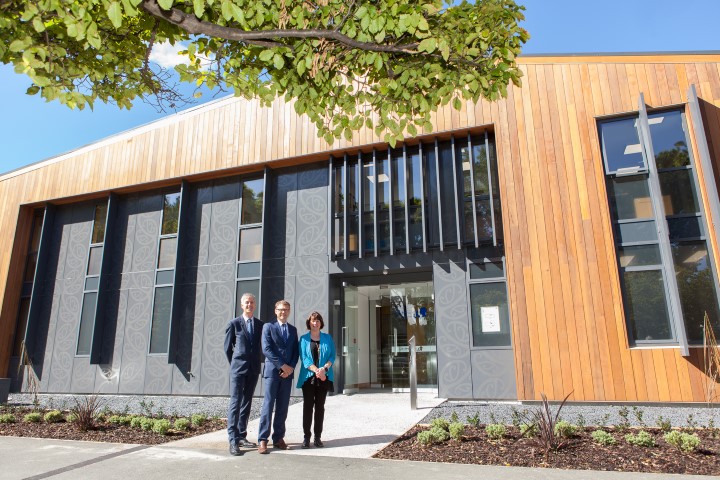 After waiting patiently for four decades in often difficult conditions, the Dunedin Study has finally been rewarded with a brand new, permanent, purpose-built home.

The new building was officially opened by Tertiary Education Minister Paul Goldsmith on Wednesday, 25 January 2017, and reflects not only the importance of the Study to the University, but also its national and international significance. About 100 people attended the opening ceremony of the Study's new headquarters located on the corner of Union Street and Anzac Ave, directly opposite the Forsyth Barr Stadium. During the ceremony, the Vice-Chancellor,  Prof Harlene Hayne, personally thanked the Founding Director, Dr Phil Silva for his ''brainchild'', the ''most successful longitudinal study of health and human development anywhere in the world''.

Right: The Minister for Tertiary Eduction, Paul Goldsmith, unveils the commemorative plaque for the building opening.

When the study first started it ''ran on the goodwill of the Dunedin community'', including being housed in the Sunday school rooms behind Knox Church for a decade. Then, in the mid-1980s, it shifted to the Barningham Building located behind the University of Otago Dental School where it remained for for 30 years. Then, in 2015, when the Barningham Building was set to be demolished for the Dental School redevelopment, the University gave approval for new, purpose-built premises to be constructed to house the Study. The Unit moved into temporary premises at the Otago Cricket Pavilion Annexe at Logan Park and construction of the new-build commenced in 2016.

''It had very humble beginnings, a very long time ago; some might say too humble for too long,'' the Study Director, Professor Poulton, said. Now, the Study was housed in a ''superb environment'' and everyone involved felt ''very proud, very vindicated and extremely well supported''.

The building, which was designed and managed in-house by the UoO Property Services Division Design Office and the Capital Projects Unit, was constructed by Cook Brothers.

Its design keeps the members of the Study first and foremost in mind. The Study members return to the Unit every few years from all corners of the globe to take part in the Study assessment phases. Their day of intensive interviews and testing covers every aspect of their lives and wellbeing, from mental health to cardiac fitness and respiratory tests. The Study members will receive a welcome surprise when they arrive at the new building to attend the next assessment phase at age 45 which commences in April 2017 and which will be ''the most complex, broad-ranging, cutting edge assessment we have ever done''.

Because Study members' identities are never revealed, care was taken to ensure the building has a private entrance, private parking, and a discreet street façade. The ground floor is dedicated to research, and includes interview rooms and specialised testing areas. The first floor is for offices and meeting rooms for researchers and support staff.

“We have done our best to carefully design the ground floor research space to be as useful and flexible as possible to future proof it against likely and expected assessment needs in the future. But we have done that in a style that is fitting for the Dunedin Study – so there are no high ceilings or traditional University feel to these spaces,” Mr Sean Hogan (the Study's liaison office with the design team) says. “Murray Goldfinch, the University's Strategic Architect, designed the space to meet our simple but unique needs.

“The building is beautiful to look at but feels homely inside. This really should let us gather some of the most complete data on our Study Members both at this and future phases, and means that now, perhaps for the first time, the environment for the Study Members matches the incredibly high standard of research data they provide freely when they visit us.”