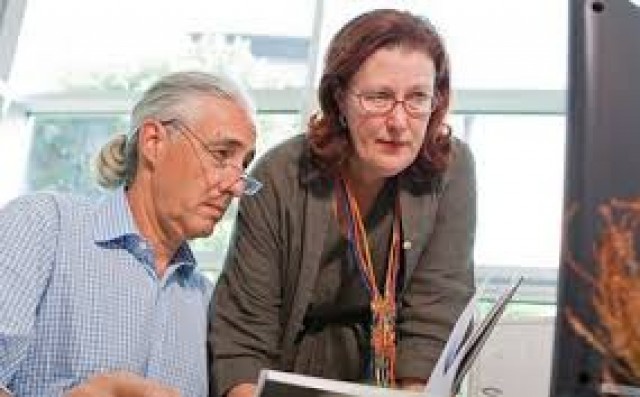 Professors Terrie Moffitt and Avshalom Caspi, partners in research and in marriage, were jointly recognized with the Klaus J. Jacobs Research Prize for Productive Youth Developmentat a ceremony held in Zurich on 3 December 2010. The prize includes a 1 million Swiss Franc award to further the couple's research. Professors Moffitt and Caspi are Theme Leaders in the University of Otago’s internationally renowned Dunedin Multidisciplinary Health and Development Study, for which Professor Moffitt is also Associate Director.

On 29 October, they also received the Ruane Prize for Outstanding Achievement in Child and Adolescent Psychiatric Research from NARSAD, the Brain and Behavior Research Fund. The $50,000 award recognizes the couple's international research exploring how the environment and genes interact to shape human behaviour and mental health.

Their path-breaking work has been concerned with human growth and development from childhood through adulthood and has shown that it isn't just genes or environment that shape a person, but rather the interactions between them.

“With heart disease and cancer, genetic researchers have always known to include factors like smoking and exercise. We wanted to do the same thing for the study of behavior,” said Moffitt, the Knut Schmidt Nielsen Professor at Duke University, USA, and Professor of Social Behavior and Development at King’s College, London.

Combining detailed histories and psychological testing with genetic analysis, the couple's work relies mostly on two large, long-term studies. The Dunedin Longitudinal Study is following 1,000 people born in 1972 in New Zealand who are now 38 and have children of their own. They have been interviewed and measured every two years up to age 15, then at ages 18, 21, 26, 32 and, currently, at 38. The Environmental-Risk Longitudinal Twin Study follows 1,100 British families with twins born in 1994-1995. They have been tracked from birth to age 12, and are entering adolescence.

These two study cohorts are gold mines of data that Caspi and Moffitt have mined for genetic and environmental markers that might predict costly long-term mood disorders, antisocial and criminal behavior, psychosis, and addiction.

"I think of the longitudinal studies as our scientific tool," said Caspi, who is Edward M. Arnett Professor of Psychology and Neuroscience at Duke and Professor of Personality Development at King’s College, London. "Other people have a microscope or a scanner to do their measurements. We bring in experts as needed to help us explore whatever questions we can in the data."

In recent years, the pair have published studies on breast feeding and IQ, marijuana use and gum disease, early exposures to drugs or bullying leading to later conduct problems, pre-adolescent signs of psychotic disorders, and a replication of their work linking a particular genotype with a greater risk for long-term mood disorders in people who were exposed to psychological trauma in childhood.

"What's truly spectacular is that, not only are they producing so much work, so much of it is so good," said developmental psychologist Laurence Steinberg of Temple University, last year's winner of the Jacobs Prize. "Lots of people have big data sets. It's their ideas that merit this award."

Caspi and Moffitt will return to Dunedin early in 2011 to spend time at the Dunedin Multidisciplinary Health and Development Research Unit during the age 38 assessment data collection phase of the Dunedin Study which is currently under way. Each of the nearly 1,000 subjects will come to the Unit for a one-day assessment from wherever in the world they are living. During the assessment, nearly all aspects of their physical and mental health will be examined, including cardiovascular, dental, respiratory, sexual and mental health, psychosocial well-being, and detailed interviews about relationships, behaviour and family.

"When you study people from birth to adulthood, by necessity you have to change what you study," Caspi said. "Puberty was fascinating, but now we're learning about cardiovascular disease."

As good as the longitudinal studies are, they are only observational, Caspi added. One can't randomly assign people to the condition of violence victimization to measure its effects. The researchers also can't go back and ask questions they wish they had included when the subjects were 7 years old, he said.

Moffitt first began working with the Dunedin Study when the participants were aged 13 and she began to probe the neuropsychology of conduct disorders. "The study subjects were just the right age," she said. What she concluded in part was that most adolescents are only temporarily unmanageable, while others are on a life-long trajectory of violent and destructive behavior that stems from an interaction of their genes and family environment. This idea, first described in a 1993 paper, has had profound implications for psychology, criminology and the law.

Steinberg said Moffitt's findings on adolescent conduct disorders had direct bearing on two recent US Supreme Court decisions abolishing the death penalty and sentences of life without parole for adolescent offenders. "A lot of kids do bad things as adolescents and then grow up to be law-abiding adults," Steinberg said. "We really shouldn't leap to conclusions about the long-term prospects of a juvenile offender. Terrie's work on this has transformed the way the world thinks about adolescent crime and delinquency."

Neither one's genes nor one's childhood determine a life's course, Caspi said. It's the interactions that matter.

"The key point we want to make is that you can't choose your genes, but you face many choices in life which can determine how those genes will play out," Moffitt said. Though a child doesn't have much control over an abusive household, Moffitt and Caspi's findings argue for schools and families to intervene forcefully on behalf of troubled kids early to prevent difficulties later on.

"Because we follow people from early childhood into adulthood, we can ask 'How serious is this problem?" Moffitt said. "If you left it alone, would the child outgrow it? It might be cheaper for the government not to do anything. It might be easier for the parents, and it might avoid the risk of labelling the child or doing more harm than good. But we've been able to identify certain key problems that children have that really must require intervention. An ounce of prevention truly is worth a pound of cure."